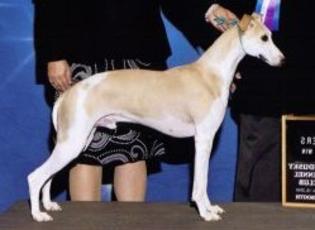 The Whippet is a member of the Hound group and specifically a Sighthound. The breed originated in England about the mid 1800's. They were bred to pursue small game such as rabbits for their owner's dinner. In the northern part of the country they became race dogs and "rag racing" was a popular sport in the working man's community. Often referred to as the "poor man's racehorse" the breed grew in popularity. The breed was officially recognized by the American Kennel Club in 1888. Whippets, especially puppies and young adults, can be very active and require plenty of exercise. While this is an active breed they do have plenty of down time to cuddle on the couch. They make wonderful pets in a home prepared to provide an environment thqt allows them enough exercise, They are not only wonderful companions but great at so many activities. While we mainly participate in dogs shows and lure coursing this breed also excels at things such as racing, fast cat, dock diving, barn hunt, agility, rally, and obedience. 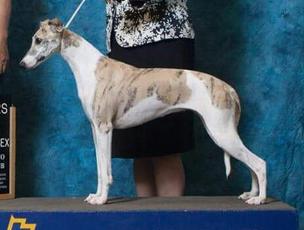